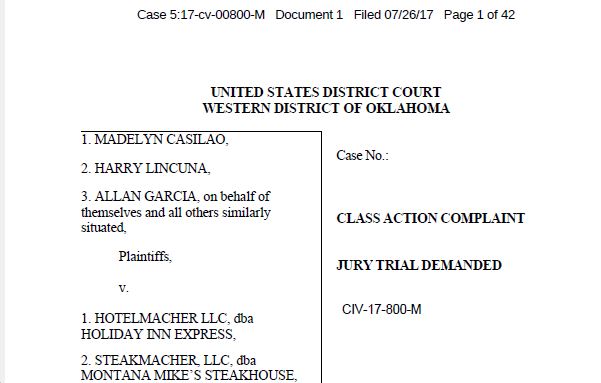 OKLAHOMA (Thurs., July 27) — Workers recruited from the Philippines to work in hospitality businesses in Oklahoma under the H-2B guest worker program filed a federal lawsuit today alleging they were induced to pay high recruitment fees and then were paid less than they had been promised, denied the lodging, meals, and transportation they had been promised, and threatened with harm.

According to their complaint, the plaintiffs were paid so little they could barely, if at all, cover their expenses in Oklahoma — never mind repay the funds they borrowed to pay the recruiters, or send money home, as they had planned.  Among the defendants are the operators of a Holiday Inn Express, a Montana Mike’s Steakhouse, and the Water Zoo in Clinton, Oklahoma.

“I was really excited to go to the U.S. to work. We thought we would be protected workers with good conditions; we didn’t think there was fraud in the U.S.,” says plaintiff Madelyn Casilao, who now lives in California. “I was expecting to send money home and repay the recruitment fees, but we barely even had money to survive in Oklahoma.”

Plaintiffs Harry Lincuna, Allan Garcia, and Casilao are seeking class action status for the case. According to their complaint, Walter Schumacher, Carolyn Schumacher, Hotelmacher LLC, and their other businesses received federal Department of Labor certifications for H-2B visas for more than 110 workers in 2008, 2009, 2012, and 2014.

The complaint alleges violations of U.S. anti-trafficking laws, and breach of the employment contracts that were entered into with the workers or for the benefit of the workers.

Casilao, Lincuna, and Garcia are represented by Legal Aid at Work, Equal Justice Center, and their local co-counsel, the ACLU of Oklahoma.

“The bait-and-switch tactics alleged in this case are a hallmark of labor trafficking cases,” says Legal Aid at Work senior staff attorney Mana Barari. “The complaint alleges the employers in Oklahoma reneged on their promises and legal obligations, treated workers as cheap disposable pools of labor, and exploited their vulnerabilities as immigrant workers who depend on their employer to stay legally in the US.”

«This lawsuit was filed to remedy alleged abuses of the immigration system and violations of these workers’ basic rights,’ says Caitlin Boehne, staff attorney with the Equal Justice Center. “The plaintiffs are filing this class action complaint today to hold the defendants accountable for their alleged mistreatment of the many other workers who came to Clinton based on what the plaintiffs claim were false promises,”

About ACLU of Oklahoma

The ACLU of Oklahoma is an affiliate of the American Civil Liberties Union, a national not-for-profit, non-partisan, voluntary organization founded in 1920. Its purpose is to protect those rights guaranteed by the United States Constitution and the Bill of Rights such as freedom of religion, freedom of speech, freedom of the press, freedom of assembly, freedom to petition the government for a redress of grievances, freedom of association, the right to privacy, the right to due process of law and the right to equal protection under the law. The Oklahoma affiliate was established in 1964 and opened its first headquarters in 1973.

About the Equal Justice Center

The Equal Justice Center is a nonprofit law firm and employment justice organization that empowers low-income families, workers, and communities to achieve fair treatment in the workplace, in the justice system, and in our shared society — regardless of their immigration status. The EJC provides direct legal representation that enables working men and women to recover unpaid wages and combat other basic injustices they encounter in their work, while working for policy changes and systemic reforms that protect and lift up the labor and human rights of both U.S.-born workers and transnational workers in our new global labor market. For more information, please visit: www.equaljusticecenter.org.

Legal Aid at Work (formerly Legal Aid Society-Employment Law Center) delivers on the promise of justice for low-income people. We provide free direct services through our clinics and helplines. We offer extensive legal information for free online and in trainings, we litigate individual and class actions, and we advocate for new policies and laws. Details:www.legalaidatwork.org.